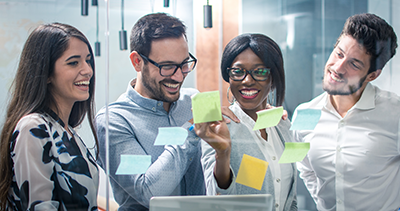 Want a more purposeful, aligned, and engaged organisation? “Make sure managers and direct reports are taking a collaborative approach to performance,” says Susan Fowler, senior consulting partner with The Ken Blanchard Companies and coauthor of the company’s Self Leadership training program.

“In my early days as a consultant, I was asked by leaders of an organisation to help improve telephone communication skills. I soon realised that the organisation wasn’t actually interested in general telephone skills but only wanted to address the mistakes being made at their front desk—especially the negative feedback from employees and customers about one telephone operator in particular. I decided to work directly with the operator on goal setting.

“She had been in her role for a long time but her manager had never attempted to work with her on setting goals—he had only expressed frustration about the complaints. Her service position was primarily reactive and the manager had found it too challenging to set goals for a job where there was little control.

“She and I tackled the negative feedback regarding mistakes by setting a goal to reduce mistakes by 50 percent over the next two months. We identified actions she could take to improve accuracy and customer service. We also asked company employees to monitor their messages for mistakes and to report any customer complaints.

“After a couple of months, I checked in and was dismayed to learn that inaccuracies and complaints had actually increased! We attributed the bad news to the fact that we had brought attention to the problems and asked for feedback. We decided to consider the feedback a gift and began analysing the data we’d received.

“Together, we discovered that most of the mistakes were occurring between the hours of 2:00 and 4:00 p.m. Pacific Time. When the business day ended in the Eastern and Central Time zones, calls were routed to the California office. The extra volume was too much for one person to handle, putting an unreasonable expectation on the operator and her ability to deal with calls in a friendly and effective manner.

“The data gave us the evidence we needed to ask for help. We asked the operator’s manager to put a second person at the switchboard for those two hours. Two months later, the operator had not only achieved but exceeded her goal,” says Fowler. “It was a simple solution—but without a collaborative goal-setting approach, we never would have understood the underlying cause of her poor performance. She would have continued to get negative feedback—and maybe lost her job.”

That’s why Fowler is so adamant about approaching goal setting as a joint responsibility where managers and team members work together to clarify expectations, identify challenges, and develop a plan for accessing the resources each person needs to succeed.

“Managers and direct reports need to sit down and talk about what it would look like if each of them were doing the best possible job. It is a rich, deep conversation that clarifies expectations on both sides about what the job is and how they can work together to create alignment in a way that is effective, engaging, and worth pursuing.”

Fowler says this type of approach requires tweaking the SMART goal criteria used in most organisations.

“Most people know SMART as specific, measurable, attainable, relevant, and trackable. At Blanchard, we recommend changing the M to motivating.”

Fowler explains that if managers don’t explore a team member’s motivation and create a way for each individual to connect their work to personally meaningful values, the manager ends up having to hold them accountable.

“Managers who focus on only being specific and measurable in goal setting end up spending their time holding people accountable. Why? Because the goals weren’t personally inspiring to the direct report. Help people be accountable so you don’t have to hold them accountable.”

Fowler teaches managers to make sure they have a conversation with each direct report where they explore the individual’s self motivation to achieve each goal. This ensures the person’s motivation isn’t dependent on external factors they can’t control.

“When someone can connect a goal to their personal values, the result will be a person who is accountable—because they have clarified, negotiated, or reframed the goal in a way that is personally meaningful and important. That’s a key learning objective in our Self Leadership program. We teach individual contributors that when they are given a goal, it is their responsibility to:

“Working collaboratively to clarify, negotiate, or reframe goals sets up a joint accountability between manager and direct report that leads to goal achievement.”

From goal setting to goal achievement

Clear goals set the stage and make it easier for the manager to provide the appropriate levels of direction and support a person needs to get the job done, says Fowler.

“The reality is that most managers have their own work goals at the same time they are managing the work of others. I’m always surprised when organisations expect managers to be aware of what is going on inside the heads of every one of their direct reports while they are each working on their different tasks.  We know from experience that even our loved ones—the people we are closest to—often don’t know what we are thinking. Why would we expect managers to know what each of their direct reports is thinking?

“At Blanchard, we teach managers and direct reports how to use a shared language to describe the four stages of development everyone goes through when presented with a new goal or task. This ranges from enthusiastic beginner when someone is just starting out, through the motivational dip we describe as disillusioned learner, to capable, but cautious contributor as they build competence and commitment, and finally, to self-reliant achiever when they’ve mastered the task.

“When managers and direct reports have a shared understanding of development levels, it provides them with a means to have effective conversations every step of the way. Now a person can go to their manager and say, ‘I’m at the D1 level of development (or the enthusiastic beginner stage) on this goal. I’m excited about the challenge but since I’ve never done it before, I need direction from you.’”

A shared language also makes it easier for the manager to respond appropriately and more effectively, says Fowler.

“If an individual needs direction, a manager can immediately provide it or find a resource that can. This same shared language can make it easier for a manager to say, ‘I don’t know how to do that either—let’s find a resource for you.’

“When goal achievement is pursued as a collaborative responsibility, it gives the manager permission to talk about other resources and ways of getting the team member what they need.”

An important twist when engaging in one-on-ones

One additional recommendation Fowler has for managers is to share ownership of one-on-one meetings.

“A lot of people think the one-on-one should be driven by the manager.  What we’re saying is that the agenda for the one-on-one should be directed by the direct report. If the manager is leading the one-on-one, it’s pretty hard to distinguish it from other kinds of performance management discussions, such as goal setting or feedback conversations. When the direct report sets the agenda, they are saying, ‘I understand this is my goal. Here is the progress I’m making and here is what I need, either from you or from another resource, to keep moving forward.”

Fowler encourages leadership, learning, and talent development professionals at companies of all sizes to consider how they can bring a more collaborative approach to leadership in their organisations.

“In the last 15 years I have seen a tremendous increase in research that identifies the importance of self leadership. In fact, increasing the proactive behaviour of individual contributors has been identified as the single most important ingredient for the success of organisational initiatives.

“Teaching people how to use a shared language to self diagnose and partner with their managers is a great way to get started. It creates an engaging and motivating environment for the individual and helps the manager and the entire organisation move forward more quickly to succeed.