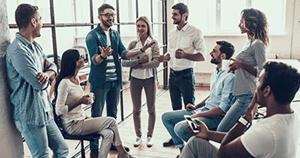 Work teams progress through four basic stages of development: Orientation, when the team is just starting out; Dissatisfaction, when conflict inevitably arises; Integration, as team members begin to learn how to work with each other; and Production, when the fine-tuned team is achieving its purpose and goals.

“The ability to balance candour and curiosity is particularly important in the Dissatisfaction stage of team development, where conflict is higher, misunderstandings are more prevalent, and the risk to team cohesion is greater than in any other stage,” says bestselling business author Craig Weber in a recent article for HR Grapevine.

Weber, author of the books Conversational Capacity and Influence in Action, worked with The Ken Blanchard Companies on the design of their new Team Leadership program.

“High candour creates conversations that are open and direct. People put forward their best ideas, biggest concerns, and most creative suggestions in a clear and compelling way.

“At the same time, high curiosity leads to conversations that are open-minded, inquisitive, and learning focused. If one team member has a view that differs from the rest of the team, rather than getting defensive, other team members get interested in exploring how that colleague sees the issue differently. They ask questions to discover what they might learn. It’s in this sweet spot—where candour and curiosity are in balance—that the best teamwork occurs.”

Weber refers to the ability of an individual or a team to remain in the sweet spot under pressure as their conversational capacity. And the more difficult the issue a team is facing, the more challenging their goals, and the more intense the differences of personality or opinion around the table, the more important this ability becomes to team performance.

“When a team leaves the sweet spot and conversational capacity begins to drop, it’s usually because team members have drifted too far toward one pole or the other. If I’m in a meeting and I let go of candour, for example, I may become overly guarded and cautious. I’ll sit there quietly, not saying something I should. Or, if I do speak up, I’ll water down or sugarcoat my point. If I drop curiosity, on the other hand, I may become more closed-minded, arrogant, and argumentative. I’ll participate in the conversation with my mind shut and my mouth open.

The good news, says Weber, is the ability to work in the sweet spot is a discipline that can be mastered if team members are willing to put in the practice to improve the conversational capacity of their teams and work relationships.

“One person can have a profound effect on the way a meeting unfolds or a decision gets made—even if they’re the only person in the room with the skills. Some of us are more naturally curious while others are more instinctively candid, but we can all learn to communicate in a more balanced way and use this ability to make a powerful difference in our teams, organisations, and communities.

“In both of my books, I quote from Airto Moreira, a Brazilian jazz percussionist, who says this about playing jazz: ‘I listen to what’s being played and then I play what’s missing.’ That’s a great way to think about how each of us can wield more influence. We can learn to pay closer attention to what’s being played in a conversation and then learn skills for playing what’s missing. Is there a lack of candour in this meeting? What can I do to ratchet it up a notch or two? Or is there a lack of curiosity and people are starting to butt heads? What can I do to slow down the conversation and get it focused back on the issue we’re trying to address?

An organization is a community of discourse, says Weber. Leadership is about shaping the nature of the discourse—and effective leaders shape discourse in the direction of learning, progress, and growth.

“A core idea in my work is how, no matter your status or station, you can play a leading role in building healthier work relationships, teams, organisations, and communities. Building your conversational capacity, and that of your team, is the key.”