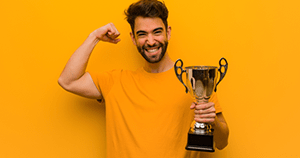 An essential mindset for achieving your goals and contributing to the goals of others is recognising and appreciating your power at work.

Susan Fowler, a senior consulting partner with The Ken Blanchard Companies, witnessed many amazing transformations as individuals altered their mindset related to power, explored their points of power, and proactively created positive change.

This transformation begins by recognising an important truth about power: not realising our own points of power may be one of our greatest assumed constraints.

When Susan talks to people about power at work, they often tell her they don’t really have any power.  That’s because they think about power through a very narrow focus on position power—having the title or authority to make certain decisions such as to hire or fire, to go or no-go, or to establish budgets.

But position power is only one of five types of power we all have at work.  The others are:

Task power—having control over a task or job and doing it well, such as

Personal power—having interpersonal and leadership skills, passion, inspiration, or a positive personal vision of the future, such as

Relationship power—being connected or friendly with other people who have power, such as

Knowledge power—having relevant experience, expertise, or credentials, such as

Susan shares a story about the way one person without much position power was able to leverage the other types of power.

Pete was a shy, quiet, and rather passive graphic artist who was tied to his computer within the company’s graphics department. After exploring the five potential points of power during a Self Leadership workshop, he acknowledged he had knowledge and task power—he was masterful at using graphics programs and designing materials that his clients loved. He also realised he lacked position, personal, and relationship power.

Pete activated his knowledge power by setting up free lunchtime classes for coworkers who didn’t have access to computer training. He built meaningful relationship power while he practiced communication skills that enhanced his personal power.

The president of the company heard about the classes and asked Pete to personally tutor him. The president learned that Pete was a fitness advocate, and soon Pete was also supervising a light workout after each of their computer sessions.

Instead of focusing on the position power he didn’t have, Pete leveraged the knowledge, task, relationship, and personal power he did have. As a result, his confidence and sense of self-worth grew dramatically. He eventually became the manager of more than 20 people in the graphics department—and an advisor to the new head of IT.

Don’t fret about not having position power. Recognise that you have access to four other points of power—task, personal, relationship, and knowledge power—you can use to achieve your goals. Strategically use the power you have to activate power you don’t have. It’s one of the best ways to do more good for yourself and others.

Susan Fowler is a senior consulting partner with The Ken Blanchard Companies and the coauthor of Blanchard’s new Self Leadership program.