Focus on Competence and Commitment to Improve Productivity 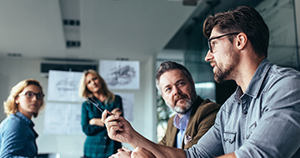 Most people will tell you they are working as hard as they can, says bestselling business author Vicki Halsey. “The problem is, they still aren’t able to keep up with the workload. Today, people need to work smarter, not harder,” says Halsey.

“That means leaders need to (1) be sure direct reports are clear on what they have to do; (2) diagnose where they are on each task; and (3) get them the resources they need to succeed. People are doing activities—and lots of them. But the activity may not be targeted toward the critical goal, task, skill, or strategy that is actually needed for the organisation to hit the target.”

According to Halsey, productivity improvement begins with observation. She likes to compare behaviours of the most productive people in organisations and the ones who struggle to keep up. One difference is that the former group has a laser focus on the work that needs to be done to achieve strategic goals.

“As Ken Blanchard says, all good performance begins with clear goals. So begin with clear expectations such as what someone needs to achieve, and by when. This is the essence of smart goal setting. Your goal is to create a crystal clear picture of what a good job looks like.”

“As we think about setting clear expectations with people, it’s important to remember our differences in communication and learning styles. I teach a graduate class at the University of San Diego and also gave the same learning preference survey to my MBA students that measures if they are visual, auditory, kinesthetic, tactile kinesthetic, or auditory verbal. Results from students representing 35 different cohorts showed only 5.4 percent in the category of strong auditory learners. Consider going beyond telling—to showing. For example, in addition to explaining what a good job looks like, provide a video so that learners can actually see the behaviour in action.”

Once goals are set, next comes diagnosing competence and commitment, says Halsey.

“Help people see where they are on a specific task in terms of ability and motivation, which we at The Ken Blanchard Companies® describe as competence and commitment. A person can be high or low on either scale. When these measurements are combined, the person will end up in one of four different development levels including Disillusioned Learner (low on commitment, low on competence) and Self-Reliant Achiever (high on commitment, high on competence.)

With an accurate diagnosis, a leader can put together a clear plan to accelerate the person’s productivity, says Halsey. But it requires a rethinking of the SMART goal setting model.

“I love the SMART acronym—Specific, Measurable, Attainable, Relevant, and Trackable. But for it to be most effective, change the “M” in the model to motivating instead of measurable.

“People want to see the impact of their work and they want to know they are making a difference. The original version of SMART begins with Specific and Measurable, which works well for identifying what needs to occur by when. But it doesn’t take into account the very human need of doing work aligned with our purpose, values, and who we want to be in the world.

“Sometimes leaders wonder why they should care how committed a direct report is to a task. When I am training a group of leaders and I hear that, I ask, ‘How many of you have something on your to-do list that you’re not motivated to do?’ Everyone raises their hand! And what happens to those things on our to-do lists? They go to tomorrow’s to-do list. And the next day’s. And what does that do to productivity? It impacts the quality and quantity of work done. So it’s critical that a leader has a very finely tuned sense of observation. They are observing their direct reports either moving toward what needs to happen, or moving away from it.”

That’s the commitment part of the equation, says Halsey—but remember it is critical to also diagnose competence.

“In its simplest definition, competence answers the question Has a person done this before successfully? If a direct report is new to a task with very little experience, the leader will need to provide a lot of direction and access to resources. If the person has accomplished the task successfully with high levels of reliability, the leader can delegate the task to them confidently. If the person is somewhere in between, the leader needs to adjust the mix of direction and support to match the person’s development level.

“So as a leader, you listen and observe very carefully. If the person is a learner, you help solve the problem for them. If they’ve had some demonstrable success but they’re a little hesitant, you flip the conversation and ask them how they think they should solve the problem.”

Halsey says in all cases, the leader needs to stay involved.

“If you leave people alone, that’s when they will move the task to the next day’s to-do list. If you want to keep accelerating their performance, you have to stay with it. Are they letting you know their status on a task, or have they gone dark? Go and check with them. If you notice you’re not seeing the person as much as you used to, you need to connect with them, figure out where they’re stuck, and get them back on track.

“Your goal as a leader is to keep the conversations flowing. That’s the secret to productivity—clear goals, people aligned on performance, and being able to diagnose then give what is needed to ensure they get the job done. When you accomplish that, you begin to work in a highly productive, aligned manner,” says Halsey. “That’s good for you, your people, and your organisation!”