Improving Leadership One Conversation at a Time 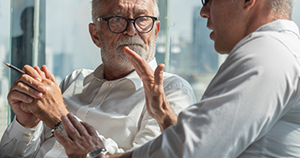 Executive coach Madeleine Blanchard held the phone to her ear, listening attentively as her newest client explained the problem she was having communicating with her direct reports.

“They say that I’m not a good listener. I’m trying to connect, but it just doesn’t seem to be working. Any suggestions?”

Blanchard thought for a moment and replied, “Well, I can hear you typing right now, so I suspect you are actually answering emails while we talk. Do you do that when you are with your people? What would it be like if you actually gave each person your undivided attention?”

In her 27 years working with executives at all levels in organisations, Blanchard has seen it all in terms of bad communication habits that prevent leaders from having the types of conversations that bring out the best in people.

“I had another client, a very smart and successful chief financial officer, who rolled his eyes whenever he talked with people. I could literally hear him rolling his eyes over the phone when he talked about his people. So I asked him, ‘Do you think your people don’t know you are rolling your eyes at them even when they can’t see you?’ Boy, he got mad, but it was because he knew it was true.”

As the head of the Coaching Services division of The Ken Blanchard Companies, Blanchard oversees 120 coaches. Identifying and addressing poor communication habits keeps them busy.

“We’ve worked with more than 15,000 leaders since we opened the Coaching Services division back in 2000. Much of our work deals with helping people first understand the impact of their natural tendencies and habits and then sharpen their communication skills.”

Blanchard keeps the focus on the basics as a starting point, recommending that leaders begin by working on their goal setting, listening, and feedback skills.

“Most leaders aren’t as good at setting goals as they think they are. It seems so obvious and simple, but it actually takes a lot of imagination and creative brain power. Leaders often think direct reports should already know what they need to do and should be able to set their own goals, but unless people are taught how to do it and given some solid support, it just doesn’t happen. Very few people have their goals written down and chunked into deliverables, with specific timelines.”

Listening is another area where leaders fall short, in Blanchard’s experience.

“Many leaders think that the most senior person should do most of the talking, when it really is the other way around. When employees are free to express themselves they ultimately learn more, become more innovative, and get better at problem solving. I have a big red stop sign in my office with the word WAIT printed on it in big letters—it stands for Why Am I Talking?” Because when I am talking, I am not listening—and as a coach and a leader, listening is what I need to be doing.

Feedback is a continual trouble spot for leaders.  Blanchard recommends that leaders ask themselves a key question before deciding to address the issue.

“Try this. Before providing feedback on performance, ask yourself this question: Am I delivering this feedback because it is something my direct report needs to hear—or is this just something I feel I need to say? If it is something you feel you need to say because you have a strong opinion or because you just want to vent, do it—but not with your direct report. Share it with your own boss or with your coach, spouse, or therapist. It’s your issue—not your employee’s.”

Blanchard cautions that this doesn’t mean leaders should be talking about an employee’s issue with others. She makes it clear that feedback on performance needs to be delivered directly to the person involved.

“I am very upfront with my people. I promise that any feedback I have for them will be shared only with them. That’s a fundamental coaching ethic. I’m also clear that I expect the same in return. If they have an issue with me, I insist they discuss it directly with me. If either of us is discussing feedback issues with others, we are gossiping—and that is damaging to our relationship and to the organisation.”

A final area that needs to be addressed, according to Blanchard, is accountability and review. She is a big proponent of weekly one-on-one meetings where problems can be discussed while they are small and manageable.

“We have to increase the frequency and quality of our conversations. The idea of a formal yearly review conversation to discuss performance and provide feedback makes no sense. That’s why so many organizations are rethinking their process. Leaders need to be talking with their people much more often than once a year about performance.”

For Blanchard, that means a focus on frequent communication.

“The universe rewards clarity, specificity, and action. As a leader, you have a responsibility to develop skills that help people focus on what is important, make course corrections as necessary, and connect their contributions to the organisation’s overall goals. This way, everyone is constantly focused on the right things—and all efforts are well leveraged.”