Innovators—3 ways to invite others to your next big idea 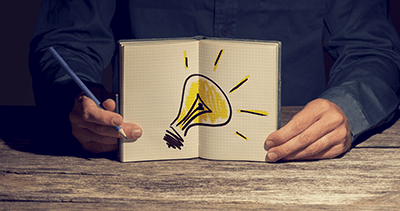 Innovation requires passion.  It takes a lot of energy to develop an idea and implement it successfully in an organisation. Fortunately, innovators have passion in abundance.

Innovation also requires collaboration. Very few ideas can be successfully implemented without the cooperation and buy-in of others. Unfortunately, innovators often struggle in this area–especially if they fall in love with their idea and become defensive about feedback.

The birth of an idea

You come up with an idea—it’s one of your best ideas—and you can’t wait to share it with the other people on your team. So you do. And you know what? They’re just as excited about it as you are. You decide to go in together and make this idea a reality.

But soon after, something you didn’t plan on starts to occur. Your teammates like your original concept, but they have some thoughts for making it better. They begin to share their thinking and give you some feedback. How do you react?

If you are an experienced innovator, you take some time to really listen to what your team is sharing with you. You explore what they are saying, you ask for details, and you draw out the essence of their ideas. You realise that no matter how good your original idea may be, it’s always smart to treat feedback as a gift and to listen closely with the intention of being influenced.

If you are a relatively new innovator—and you are really attached to your idea—you may see feedback from your team in a completely different light.  Ego can often get in the way and now you become defensive when others suggest changes. You dismiss their feedback as uninformed, uninspired, or just plain limiting. Instead of listening with the intent of being influenced, you listen just long enough to respond and remind everyone why the team should stay on course with your original concept. You become so focused on leading change that you don’t notice the energy, enthusiasm and participation of team members falling off as you march to the finish line.

It’s not until you get there and turn around for a group high-five that you see their weary exasperation with your leadership style. They congratulate you on your project.

Don’t let that happen to your next idea. Here are three ways to innovate and collaborate more effectively:

True innovation requires passion and collaboration.  Create some space for others. It will make your ideas stronger, give you a better chance for success, and create needed buy-in along the way.

David Witt is a Program Director for The Ken Blanchard Companies.
He is an award-winning researcher and host of the companies’ monthly webinar series.