Leading Effectively from Start-up Growth to Maturity: Identifying the Four Stages of Development 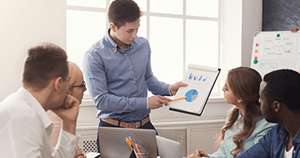 Bestselling business author Ken Blanchard believes that senior leaders need to diagnose the development level of their organisation before they consider how to best manage performance.

Blanchard explains that organisations are very different when they are in a start-up mode versus how they are working through growing pains or looking to maintain performance in a mature industry.

As Blanchard explains, “Organisations, like people, go through predictable stages of development. The leader’s role is to diagnose where the organisation is at any given stage, and then adjust their style to match its development level.”

Drawing on the four stages of development from his SLII® leadership model, Blanchard explains how this works.

“Organisational Development Stage One is where you have a startup organisation. You don’t have any results really, but people are usually excited about being there.

“In a start-up organisation, results are typically low because the goals are new and most people have never worked together before. However, relationships tend to be high because when people first come together to create a new venture, they are enthusiastic.”

Blanchard shares a personal experience from the early days of The Ken Blanchard Companies®, initially known as Blanchard Training and Development. In the winter of 1977, Ken Blanchard had the opportunity to speak at a Young President’s Organisation (YPO) international university event.

“At that time, the requirement for membership of YPO was to be president of a business before the age of 40, with at least 50 employees and $5 million in sales. I gave a popular speech about leadership, motivation, and managing change, and I was asked by several YPO members about my future plans.

“I told them that I planned to return to teaching at the university after my sabbatical. “No, you’re not,” they said. “You’re going to start your own company!”

I laughed and told them, “My wife, Margie, and I can’t even balance our own checkbook. How are we going to do that?”

Five YPO presidents promised to help the Blanchards and agreed to be part of an advisory board to assist them in starting the company. While the Blanchards were excited, they also were apprehensive about how to build a business that would make a difference for their customers and sustain a full staff—typical concerns at this stage of organisational development.

At this stage, results are beginning to show. However, while relationships are typically high at Stage 1—during the beginning of creating a new organisation—they often dip at Stage 2, when the difficulty of building a new business sets in. This is when issues around systems and structures and dissatisfaction with leadership may arise.

As Blanchard explains, “It didn’t take long for Margie and I to realise that it’s easier to talk about running a business than to actually do it. It became obvious that sales had to exceed expenses. Yet most of the people who initially joined the company were teachers and trainers, not salespeople or accountants. At this stage, it was important to find ways to balance our organisation’s purpose and passion with the realities of doing and staying in business. Strategies had to be in place to sustain ongoing business.”

While Blanchard Training & Development was getting some results at this stage, the long hours and constant pressure to learn were taking an emotional and physical toll on the founders and their early associates―and putting a strain on some relationships. As a result, Margie—who’d had little experience running a business—decided to step down as president. To replace her, the company hired an outside consultant with business experience. Rather than helping, this new president—who knew how to get results but not how to motivate people—made the situation worse, lowering morale.

“At this stage, with relationships in danger of slipping, we needed to provide people with positive reinforcement, so that relationships could continue to improve.

“Given the problems with the appointed president, Margie—who had maintained her good relationship with the people—stepped back into her old role. With a more energised and skilled team of leaders, she began to restore morale and implement important structural changes.”

Blanchard Training & Development moved into this stage with the publication of Ken’s bestselling book, The One Minute Manager, and the international recognition that it brought.

Blanchard explains that during this stage both results and relationships are robust, organisational goals are being met, and morale is high. In an organisation at Stage 4, people are working together with enthusiasm, leaders are emerging when and where they’re needed, and customers are raving fans. The quadruple bottom line—employer, provider, investment, and corporate citizen of choice—is healthy.

“After the success of The One Minute Manager, our company’s speaking and consulting skills were in high demand. Results and relationships reached new levels. Now we shifted to maintaining those levels of performance, always striving to actualise the vision and live by the values.”

The Importance of Diagnosis and Matching

When Mulally joined Ford Motor Company in 2006, the organisation was in deep trouble. That year it reported a $12.7 billion loss for 2006—the biggest in its 103-year history. The company’s debt was rated seven levels below investment grade, and all its assets were mortgaged. To the consumer, Ford had become synonymous with “Fix Or Repair Daily.”

Mulally began the tough climb back to profitability with a strong vision: “People working together as a lean, global enterprise for automotive leadership…measured by the satisfaction of our customers, employees, investors, dealers, suppliers, and communities.”

Understanding that Ford’s people would be the key to a turnaround, Mulally lived collaboratively—he ate with employees in the cafeteria and regularly conversed with secretaries and assembly line workers.

Upholding the value of transparency, Mulally and the company’s CFO and operations executives sat down with union officials and shared the books. The leadership team and union collaborated to reduce Ford’s employees from 100,000 to 45,000 through retirements and voluntary buyouts instead of involuntary reduction.

The results—and relationships—flourished under Mulally. By the time Mulally retired in 2014, Ford had posted 19 consecutive profitable quarters. Under Mulally’s leadership, one of America’s iconic 20th century companies had weathered the tumultuous changes of the early 21st century.”

“I love Mulally’s quote,” says Blanchard. “He said, ‘All of us want to know that we are doing great things, that we are touching a lot of people, and that what we are doing is something bigger than ourselves.’ When leaders take the time to diagnose where their organisations are at and then apply the proper levels of direction and support, they can do just that.”