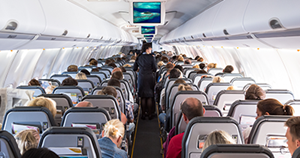 On the afternoon of January 15, 2009, Captain Chesley “Sully” Sullenberger was piloting US Airways Flight 1549. The flight was scheduled to fly from LaGuardia Airport in New York City to Charlotte Douglas and then on to Seattle-Tacoma. Shortly after takeoff, the plane struck a flock of Canadian Geese that resulted in the aircraft losing all engine power. Captain Sullenberger and First Officer Jeff Skiles successfully executed an emergency water landing on the Hudson River in New York City and all 155 people aboard were rescued safely.

You’re probably familiar with this experience that became known as the “Miracle on the Hudson.” Perhaps you remember seeing news reports of the incident when it occurred, read the book, or saw the movie about this remarkable story. In this video, Captain Sullenberger shares a fascinating minute-by-minute description of how he and the rest of the flight crew handled this extreme crisis. Randy Conley, Vice President of Client Services and Trust Practice Leader at The Ken Blanchard Companies gleaned five key principles from Captain Sullenberger’s experience that we can all apply when leading in a crisis:

1. Prioritise ruthlessly—Sully knew that without engine power the plane would remain airborne for just minutes. He instantly recognised that he only had time to focus on the few most critical actions that would have the greatest influence on the outcome of their situation. He switched on the engine ignitions, so that if they were operable they would restart, and then he turned on the APU, auxiliary power unit, to provide power to the plane’s electrical systems.

One of Conley’s favourite scenes from the movie Sully emphasises the critical importance of keeping sight of the most important priority. At the completion of one of his lessons, the instructor tells the teenaged Sully, “Never forget, no matter what’s happening, to fly the airplane.” When crisis struck US Airways Flight 1549, Sully knew that his top priority needed to be flying the airplane. In a crisis, leaders are inundated with priorities and it’s impossible to handle them all simultaneously. What are the one or two most critical needs facing your organisation? Focus on those issues, and once they’re taken care of, then you can move on to other priorities.

2. Determine and Decide—Once Sully addressed the top priorities, he quickly determined the options available: return to LaGuardia airport, divert to Teterboro airport in New Jersey, or attempt a water landing in the Hudson River. As we know, he decided on a course of action—land on the Hudson River.

Leading in a crisis often requires you to make quick decisions with partial information. When time is of the essence, default to action, not analysis. Even if your course of action isn’t the preferred option, at least you’re taking steps to shape your destiny rather than letting the circumstances dictate what happens to you. I’m sure Sully would have much preferred to make a controlled landing on a runway, but he quickly determined that wasn’t a viable option. He decided to land on the Hudson River and then did what he could to make it work.

3. Collaborate—Sully gives ample credit to his First Officer, Jeff Skiles, for his role in the Miracle on the Hudson. Those who know the story well know that this was the first time Sullenberger and Skiles had flown together. It was also Skiles’ first time flying the Airbus A320 after being qualified on the aircraft (although he had over 20,000 career flight hours on other craft). Despite these circumstances, they were able to collaborate and work together as one because of their rigorous training and clear roles and responsibilities.

Crises call for collaboration. There are too many issues at hand for one person to handle, and if the leader tries to play the hero and doing everything themselves, it will only lead to failure. “No one of us is as smart as all of us” is a statement I love because it speaks to the power of teamwork. Who do you need to collaborate with? Who has expertise you lack that is critical to managing the issues at hand? Teams succeed in crises, not individuals.

4. Communicate Carefully—Sully carefully chose the words he used during this crisis. The situation called for clear, concise, and precise language. He didn’t have time to provide explanations, encourage debate, or beat around the bush. If you listen to or read the transcript of the cockpit communications, you’ll notice one- or two-word responses between Sully and the air traffic controller. Driven partly by the stress of the situation, but also by the need to be crystal clear and efficient, Sully communicated the essentials of what was needed. When he gave the crew and passengers the command to “brace for impact,” he did so intentionally because the word “brace” held a specific meaning for the flight attendants that prompted them to enact their own emergency landing procedures. Sully also intentionally communicated in a calm and rational way, because as he put it, “courage can be contagious.”

How are you communicating during this time of crisis? Are you choosing your words carefully and intentionally, using them in a way that fosters courage and hope with your team? Now is not the time for flowery, eloquent, diplomatically worded communications. Give your people the straight truth in a candid yet caring way. They will respect your honesty and transparency.

5. Finish the Job—Landing the plane was just the first part of the job for the crew of US Airways 1549. Once the plane was safely at rest in the water, all the passengers needed to be evacuated and rescued. Sully and the rest of the flight crew immediately took action to move the passengers to safety. They didn’t stop to celebrate the safe landing. The took the next immediate action that was required. Sully’s job wasn’t over until hours later when he received confirmation that all 155 passengers and crew were safe and accounted for.

The immediate urgency of a crisis sparks an adrenaline-fueled response by leaders. We start out strong, but as time goes by and the sense of urgency fades, we often lose steam and stop leading in the proactive and visible ways our teams need. Conditions may have stabilised a bit and we may have temporarily adjusted to a “new normal,” but that doesn’t mean we’re through the crisis. The job isn’t finished yet, so keep being the leader your people need right now.

Whenever Conley heard Sully Sullenberger speak, he’s always been quick to highlight the contributions of all the people who played a role in the Miracle on the Hudson. The rest of the flight crew, the air traffic controllers, the ferry boat crews who rescued passengers, the Harbour Police, the medical personnel, and many others contributed to this successful outcome. Sully and the flight crew could only influence a few variables in this whole situation; much was out of their control.

Much of what we face as organisational leaders during the coronavirus pandemic is out of our control. Yet we can prioritise the key issues we need to tackle, decide which options are the best course of action, collaborate with each other effectively, communicate with clarity and purpose to our teams, and the see the job through to completion. That’s what it looks like to lead effectively in a crisis.

Randy Conley is the Vice President of Client Services and Trust Practice Leader at The Ken Blanchard Companies.